What is it about looking into our pasts to see how goofy, and awkward we looked in our youth that we love so much? Maybe it’s schadenfreude of seeing people in their insane outfits showing smiling without seeing how silly they look, or maybe we there’s a small pleasure in knowing that as ridiculous as we looked in high school we grew out of it and we’re living normal lives without powder blue top hats or dresses that match our parent’s curtains.

Enjoy these awkward prom photos from the Groovy era, and try not to be too hard on yourself if you wore an outfit as ridiculous, or somehow more over the top than what you’re about to see.

Leave the top hat at home 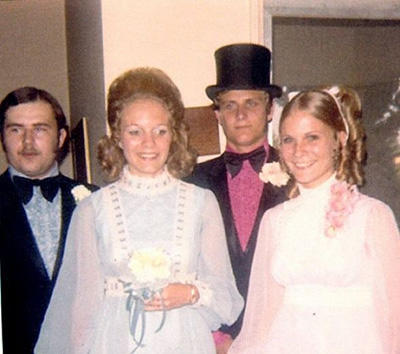 Let’s not mess around here, the eye is immediately drawn to the top hat and wine colored ruffled shirt that the guy in the back is wearing. His entire soap opera bad guy vibe supersedes the guy who’s been caught off guard on the side. At least the gals look gussied up and ready to have a good time. If only they didn’t have to hang out with ol’ top hat guy back there.

The couple who flannels together stays together 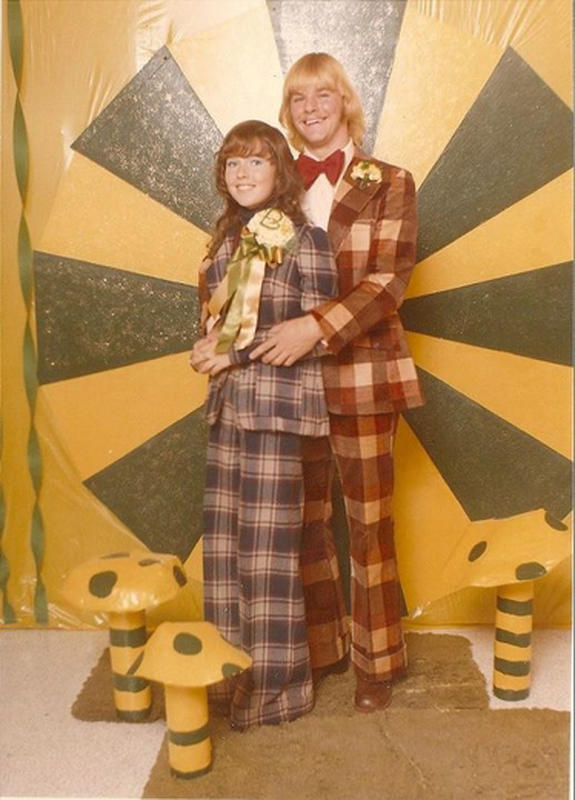 Is this not the most ’70s prom photo you’ve ever seen? Starting from the bottom – the shag carpet squares and paper mushrooms are straight out of art class (and we’re not talking about a super successful art class either). The mushroom are so mind boggling that they almost overshadow the dual plaid outfits that these two are wearing.

These two deserve props for wearing matching flannel suits to prom, but they must have been so sweaty. Hopefully there was AC in the gym that night. 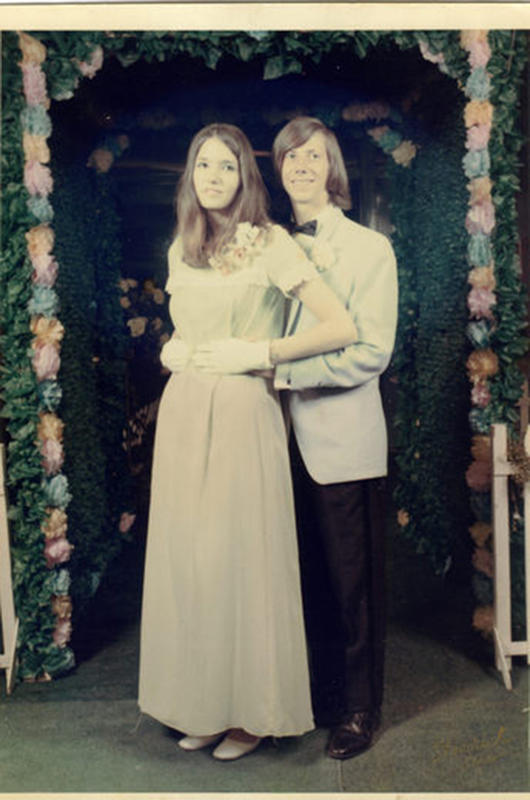 Prom photographers should really have someone on staff to make sure the couple’s they’re taking snapshots of have matching facial expressions. There’s nothing worse than seeing a young guy who’s thrilled to be at the prom, and a date who would rather be anywhere else (or with anyone else). 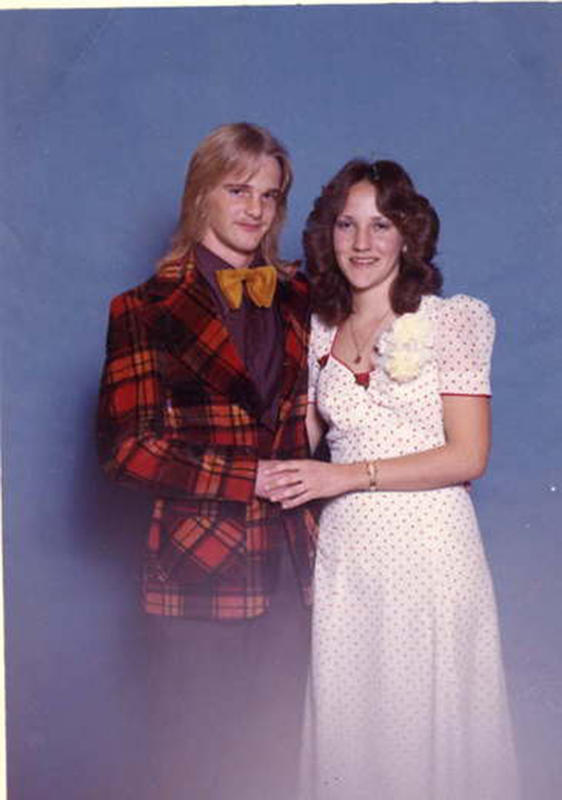 Everything about this photo is setting off our awkward alarm. Not only is the smoke machine working overtime, but this guy’s wide lapeled flannel jacket and bowtie is almost like his second date. This really was an era of interesting fashion choices. When else would someone decide to go full on Bay City Rollers to the most magical night of their young lives?

If nothing else, this guy can hold his head up high with the knowledge that he has one of the greatest mullets of the 1970s.

Recommended:  Mom couldn't stop crying when she realized what she birth to

This guy really doesn’t want to go to prom 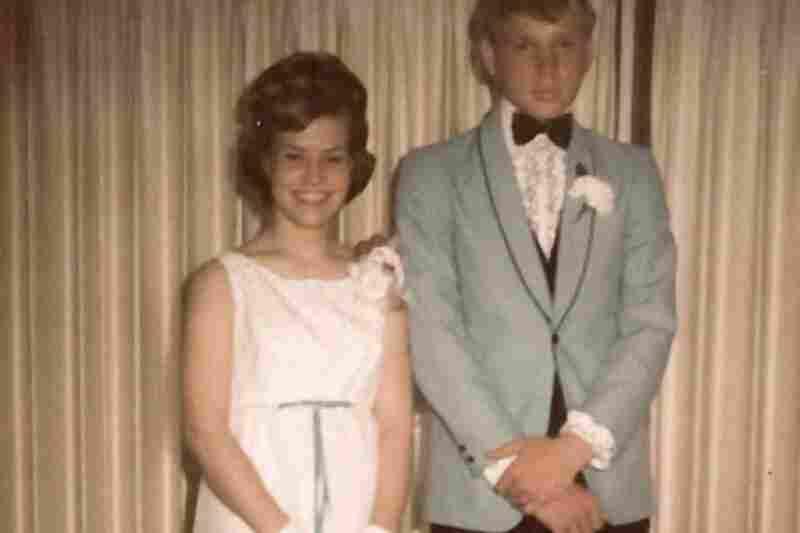 There’s a thing that teenage boys do in prom photos in every era that’s absolutely maddening – they pretend that they’re not incredibly excited to go to prom with their best gal. This guy is a great example. He has his hands folded in front of him like he’s been grounded and he looks like someone just told him that his pet gecko escaped from its terrarium. Could someone let this guy know that he’s going to prom, not the morgue?

A magical night to forget 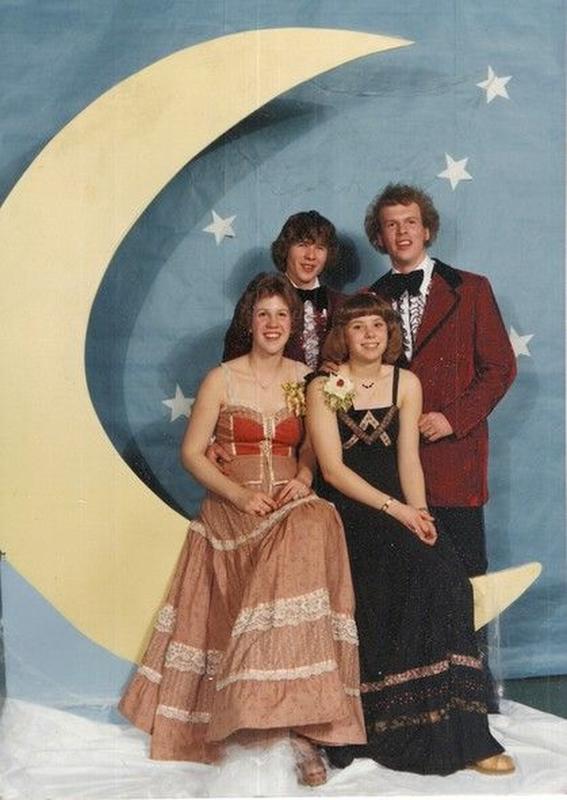 We love how much fun everyone is having here, we’re even on board with the flowy peasant dresses and ruffled shirts, but what’s happening with the “paper moon” that the school has provided? If it weren’t for the stars in the background in the background we would have thought that the gals were sitting on a giant banana. Now that we think about it, maybe that’s the school’s mascot. The fighting bananas. Is that a thing?

There’s nothing like going to prom with your dad 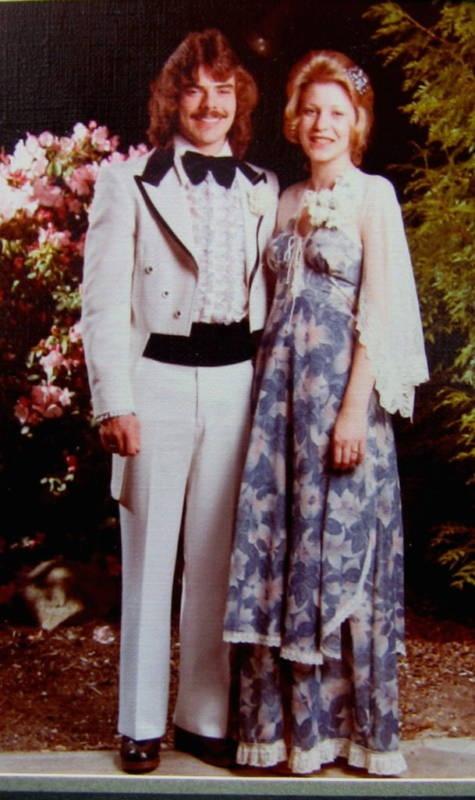 The ’70s were a special decade. Not only was fashion and music changing, but teenage boys looked like a bunch of dads forced to go back to school. This guy in particular is giving dad at a wedding vibes. Do you think they carded him when he went through the door? Or did they just offer him a job as a gym teacher immediately? 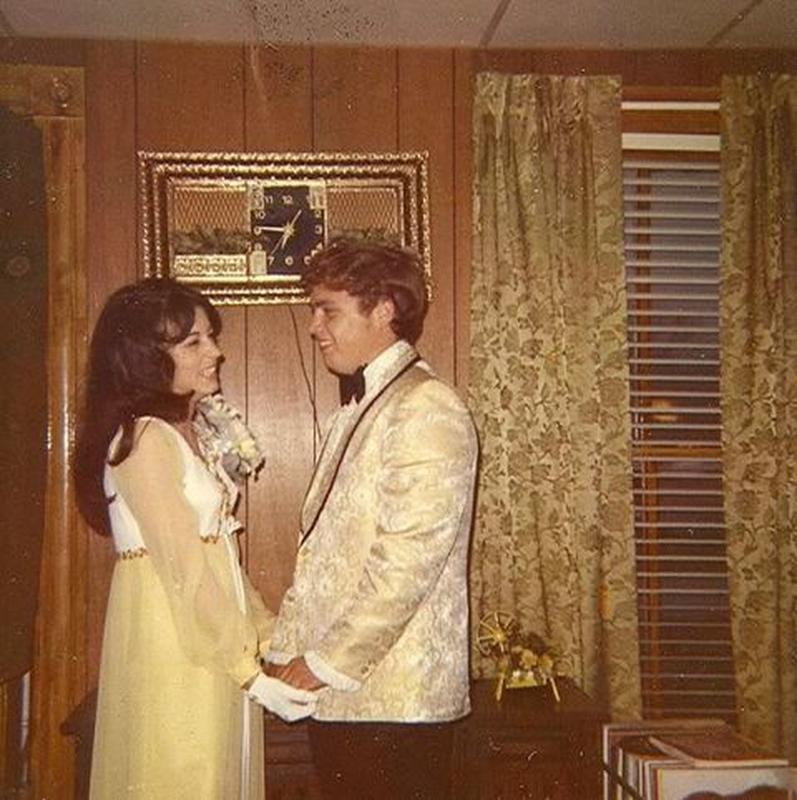 There’s nothing awkward about these teenage lovebirds (the patterned jacket is a little bit much), what we’re focused on is the “artistic” photo taken by someone’s mother. The kids should be the focal point of the photo, but for some reason whoever’s behind the camera decided that the best thing to do would be to highlight the venetian blinds on the right. At least they look happy (the kids not the blinds).

Are you sure this is the shot you want to go with? 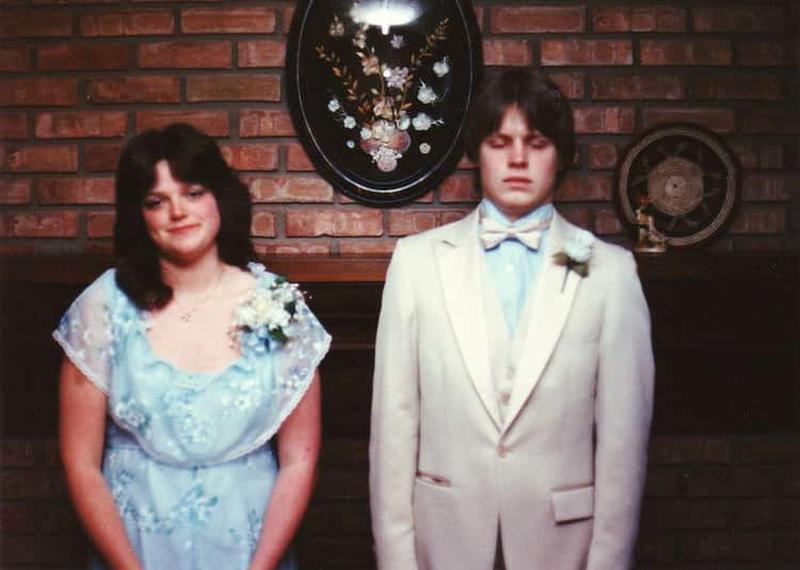 This is just painful. Neither of these kids look particularly excited about going to prom, but maybe that’s just because their pre-dance picture looks like a last known photograph. We’re crossing out fingers that the kids were allotted a second photo to remember the most fun night of their high school careers.

Is the TV going to prom? 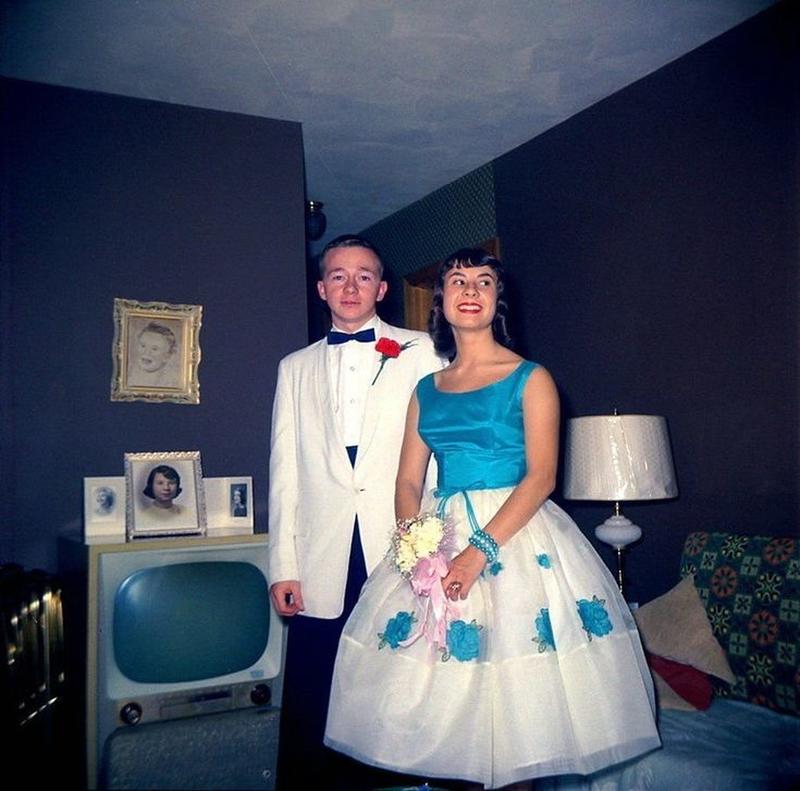 Recommended:  A woman saw a gynecologist for nine years, then discovered the unthinkable truth

Not only do these kids look great, but the Kodachrome photo looks fantastic too. Once again we’re seeing a couple of kids whose pre-prom photos are hamstrung by a photographer who just has to show off their wonderful house. A note to any parent out there who are getting ready to snap a shot of their prom ready kids – focus on the young people, not your exciting new appliances. 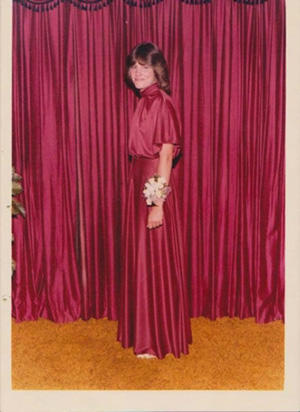 Hold up, do they really let disembodied heads attend prom? Are tickets half price? We have so many questions.

How’s the weather up there 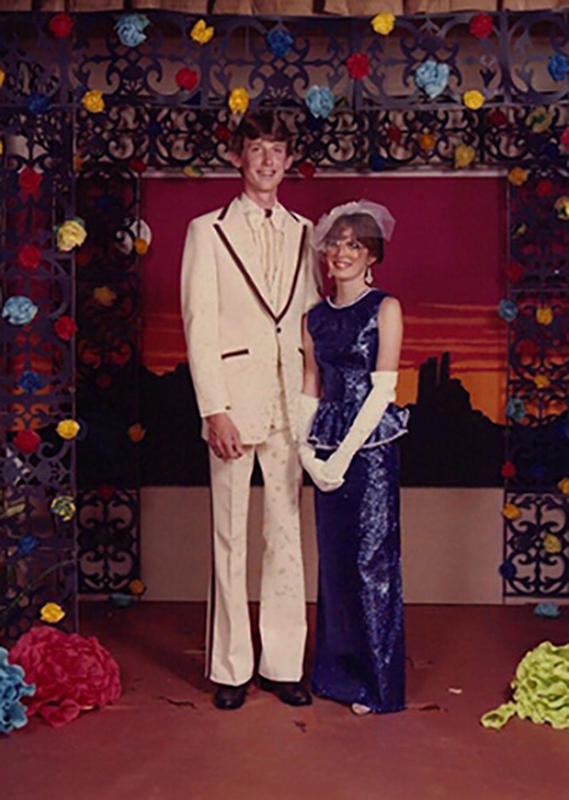 No one can help what they look like, but that doesn’t mean that their photos are any less awkward. Being a teenager isn’t fun. Our bodies change, we grow in strange ways, and some young people get growth spurts that see them go from 4’11” to 6’1″ overnight. That kind of thing can be a boon for the basketball team, but it makes prom photos an absolute nightmare. 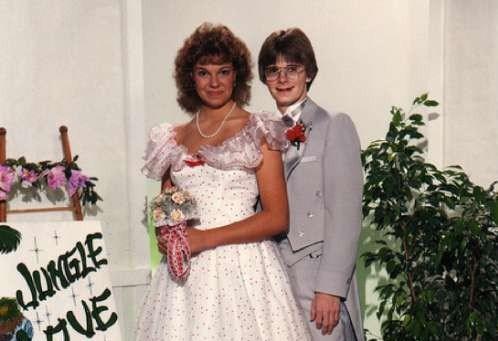 What was going on with prom themes in the Groovy era? Even without being in an overly PC era “Jungle Love” seems a little over the top for a dance with a bunch of high school students. Whatever happened to a theme like “A Night Under The Sea?” or “Racecar Madness?” Maybe that second one isn’t so hot, but it’s way less problematic than “Jungle Love.”

Just happy to be here

These two look like they’re having a perfectly fine, albeit awkward, time. As much fun as it was to go to prom there’s something mortifying about having to get dressed up in a suit like an adult and have fun. Wouldn’t it just be more fun to meet up in a basement and dance to music on the turntable? Honestly, prom is a once in a lifetime experience that has an unfortunate dress code that lends it self to being totally awkward.

Feet in the clouds 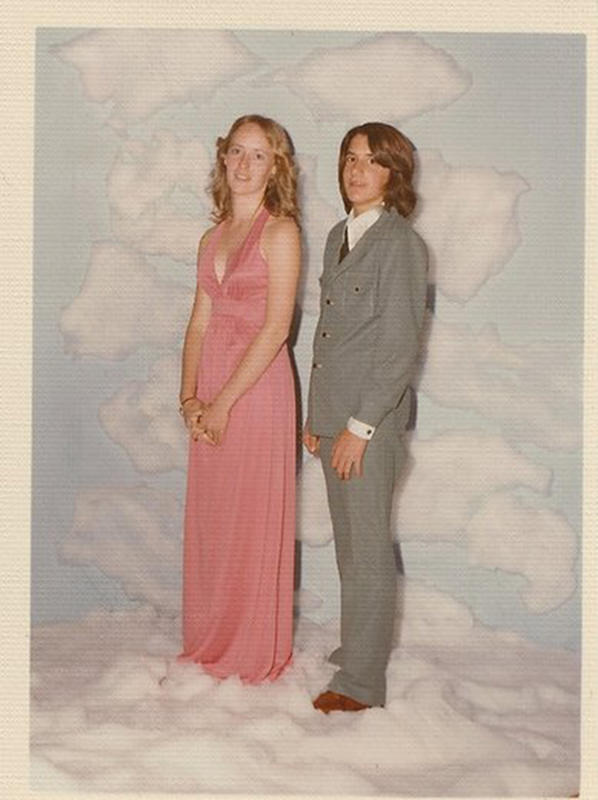 It’s not easy to decorate an entire prom, especially in the Groovy era when you couldn’t just order a bunch of stuff off of Amazon and bingo bango have a prom theme in the box. It’s still a little sad that someone just threw a bunch of cotton on the ground to try and make it look like the kids were walking on clouds. It’s a great concept but there’s no way that people weren’t tripping over the “clouds” all night long while getting their disco on.

Once again, please leave your hats at home 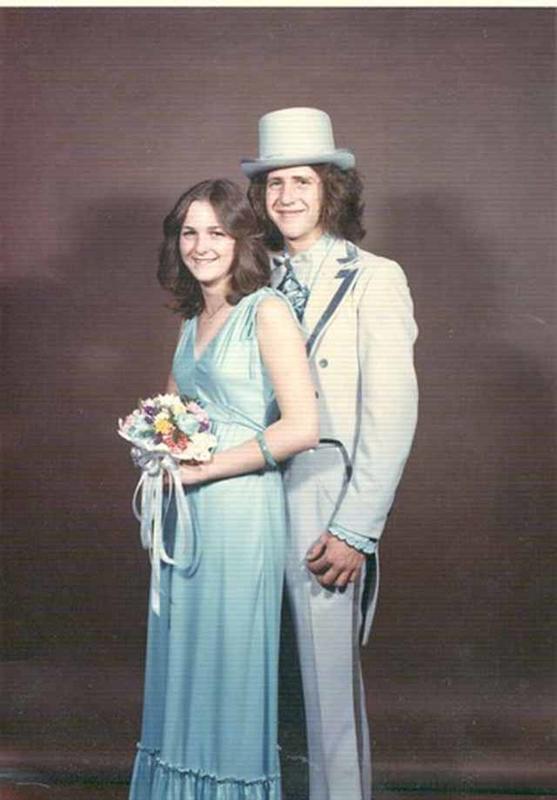 Top hats were definitely a symptom of the Groovy era, when every guy was trying to look like a sleazy character from a Cheech and Chong movie. While they’re not so much a thing now, it still hurts to see them pop up in prom photos from the ’70s when we know that so many young men wore while trying to look cool. These hats never work, and if someone tells you that you look cool in one of them then you’d better believe that they work for big Top Hat. 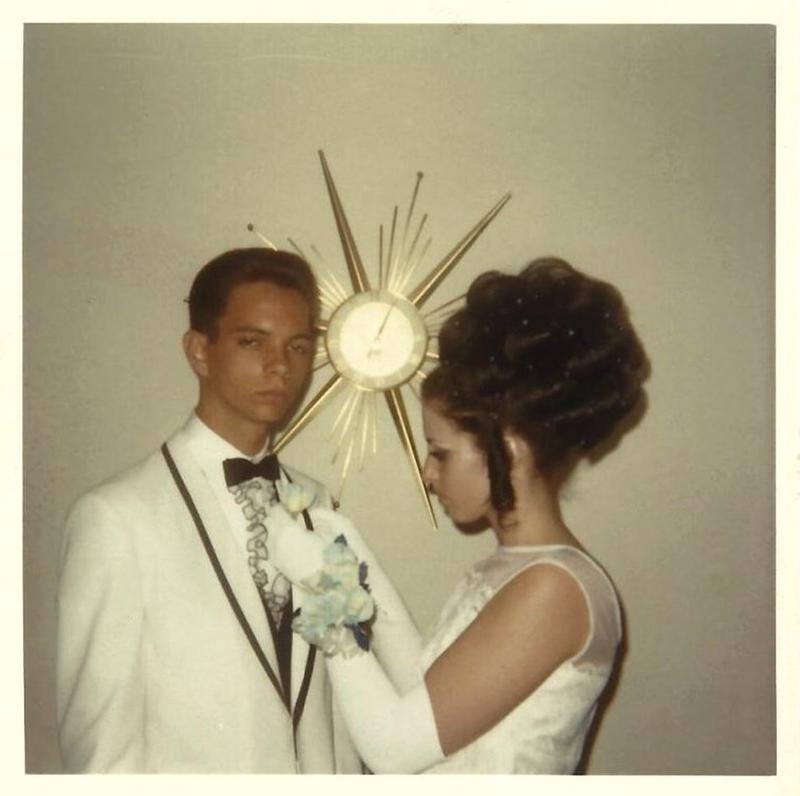 If there’s one rule for young men in prom photos from the Groovy era it’s that they cannot look like they’re having a good time. It’s illegal, they’ll get kicked off the JV football team, and they’ll be ostracized forever if they even pretend like they’re excited to go on a date with a pretty girl. We’re sure this guy was doing jumping jacks on the inside. Or at the very least he high fived himself when no one was watching. 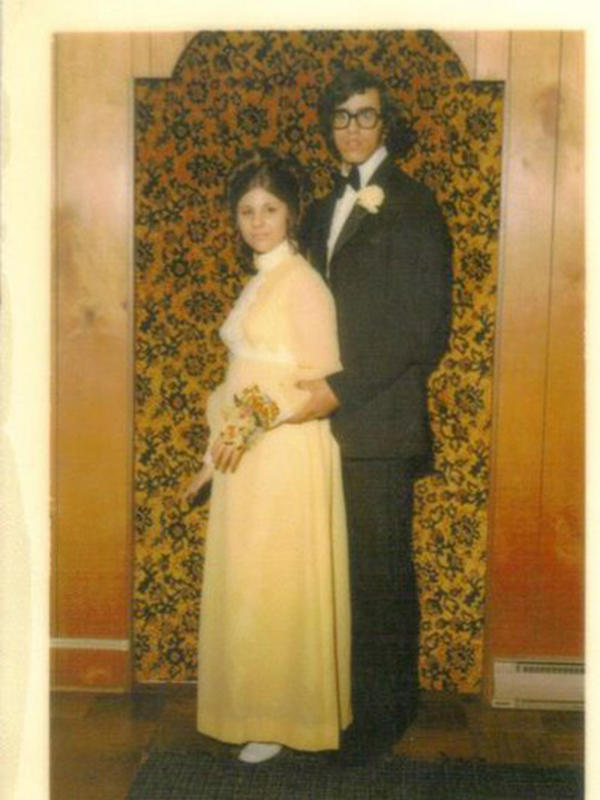 If we had to show someone what the 1970s looked like in one picture this is what we’d show them. The high collar lace dress, the space heater built into the wall, and wow oh wow that backdrop is something else. Let’s not forget the oversized glasses or all that woodgrain. Each piece of this photo on its own is no big deal, but when you put it all together things get very awkward, very fast.

He’s going to be hearing from Mickey’s lawyers 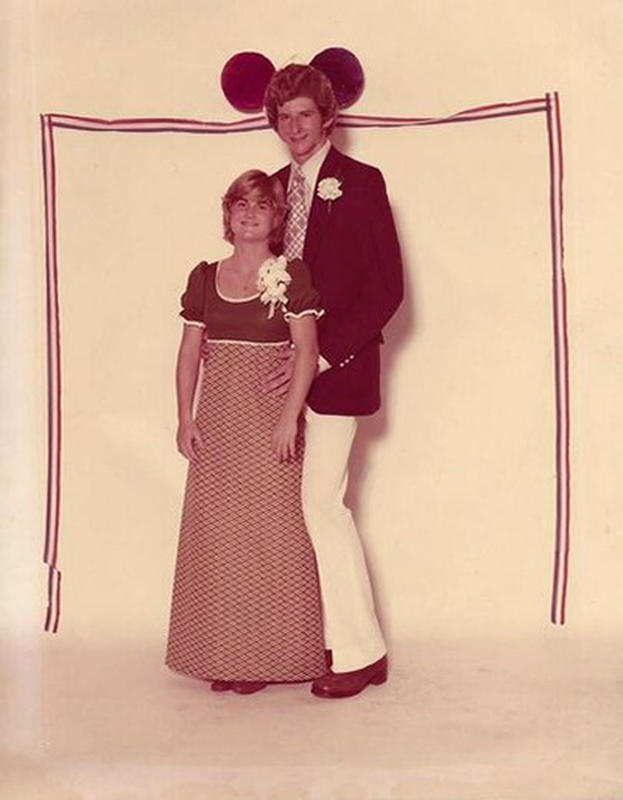 Okay, very funny everyone. Who pranked this guy so hard that it ruined his prom photos? Did he choose to pose between the two random dots on the wall to make it look like he has Mickey ears? What are the dots supposed to represent? The more we look at this photo the more it feels like some kind of experiment that we’re not understanding.

Who needs to win prom king when you can sit on the iron throne? 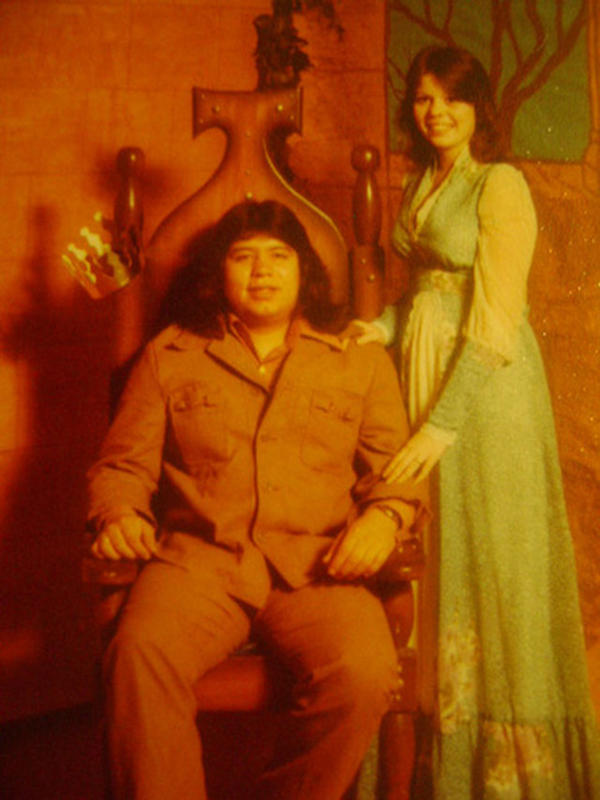 You know that you’ve got it made when you pose for your prom photos sitting in a wooden throne while your fair maiden of a prom date  stands next to you. This seems completely off but they look like they’re having a good time so who are we to judge?  All we can hope for is that they took another photo where she got to take a load off for a bit. Remember, shoes in the Groovy era were meant to be seen, not worn.